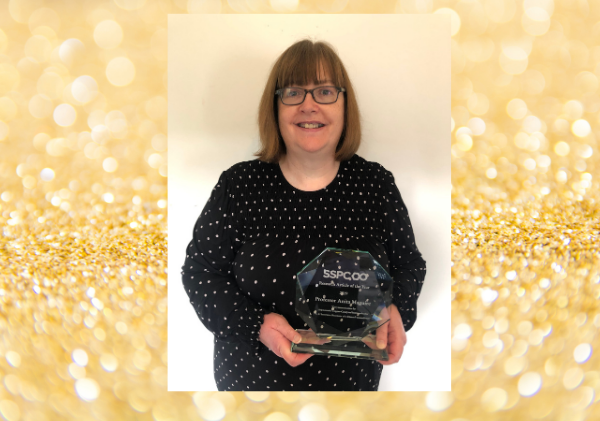 Prof. Anita Maguire, Vice President for Research & Innovation, University College Cork (UCC) and Co-Principal Investigator in SSPC’s Molecule theme, has been awarded SSPC Research Article of the Year 2019. This award recognises the accomplishments Prof. Maguire has contributed to the Centre with this exceptional scientific output:

This publication is part of an ongoing programme of research by Prof. Maguire’s team in the area of synthetic organic chemistry, focused specifically on enantioselective copper catalysed C-H insertion reactions of a-diazocarbonyl compounds with up to >98%ee. This publication describes the first example of desymmetrization utilising this copper mediated C-H insertions, resulting in highly enantioselective construction of fused bicyclic systems with control of 3 contiguous stereogenic centres.

Extensive collaboration with other research teams (both academic and industrial) in UCC, nationally and internationally is a daily feature of Prof. Maguire’s work. Her team is co-led by SSPC FI Dr Stuart Collins. Her research interests and research teams work in the areas of Synthetic Organic Chemistry and Pharmaceutical Chemistry include:

Prof. Maguire, undertook undergraduate and postgraduate studies in Chemistry at UCC (B.Sc. 1985, Ph.D. 1989). Following postdoctoral research first at Namur, Belgium then at the University of Exeter, UK she returned to the Department of Chemistry in UCC in 1991, initially as a College Lecturer, then Associate Professor in Organic Chemistry in 2002, and was appointed in 2004 to the newly-established Chair of Pharmaceutical Chemistry, jointly in the Department of Chemistry and the School of Pharmacy, playing a leading role in development of the School of Pharmacy. Since her appointment at UCC she has played a strategic role in the development of teaching and learning, including the introduction of Medicinal and Pharmaceutical Chemistry at undergraduate level for the first time.

Prof. Maguire plays a huge role in SSPC’s leadership and we are very proud to present this award.